ICA traces its foundation to 1935-1936 when the Chinese families in Binondo, Manila requested the M.I.C. sisters to open a school so that their children, who have been baptized in the Catholic Church, could be followed up in the practice of their faith. The first school was built on top of a hardware store in San Fernando, Binondo. After that, the school moved five times (Benavidez, Azcarraga, Tayuman, Narra, Intramuros) so that it could accommodate its growing population. Then, sometime in 1958, the Jesuits who were then building Xavier School, invited the M.I.C. sisters to build a school for girls in the newly opened subdivision in Greenhills. By 1960, ICA Greenhills was ready to receive the pupils of ICA Intramuros, which continued to operate its elementary department and kindergarten. Then in 1975, ICA Intramuros fused with ICA Greenhills. At present, ICA Greenhills has a total population of 3,103 with 1,678 in the Grade School Department.

Originally, ICA was an Anglo-Chinese School with a double curriculum (Chinese and English). In 1964, ICA became a Filipino school offering the Chinese Language Arts Program as an essential part of the curriculum.

True to its mission of producing excellent students, ICA never ceases to improve its curricular offering. In 2017- 2018, the school underwent the International Baccalaureate Organization accreditation process. On February 14, 2019, ICA received the Certificate of Authorization to offer the Diploma Programme of the International Baccalaureate Organization.

As such the school has become a part of a global community of more than 5,000 schools, spread in 153 countries offering at least one of the IB Programmes. For School Year 2019-2020, ICA has 46 Grade 11 students enrolled in the IB Diploma Programme.

Aside from undertaking curriculum development projects, ICA also provides the students with an environment conducive to learning. Facilities such as the Felicidad Tan Sy Building (1993), the Délia Tétreault Arts and Sports Center (1996), the Learning Resource Center (2008), the ICA Archives (2008), the Sr. Teresita Canivel Sports Building (2016), and the Henry Sy, Sr. Hall (2017) were constructed to provide high quality learning experiences for the students.

ICA has come a long way since its foundation, and part of its success can be attributed to its collaboration and solidarity with local and international education partners. ICA has been an active member of local educational organizations such as, the EDSA- Ortigas Consortium (EDSOR; organized in 1991) and the Catholic Educational Association of the Philippines (CEAP). The school has also maintained professional partnerships with several international educative communities such as the Singapore Examinations and Assessment Board (organizers of the iPSLE) since 2011, the Confucius Institute Headquarters of Hanban (organizers of HSK and HSKK) since 2014,, and the International Baccalaureate Organization (IBO) since 2018. 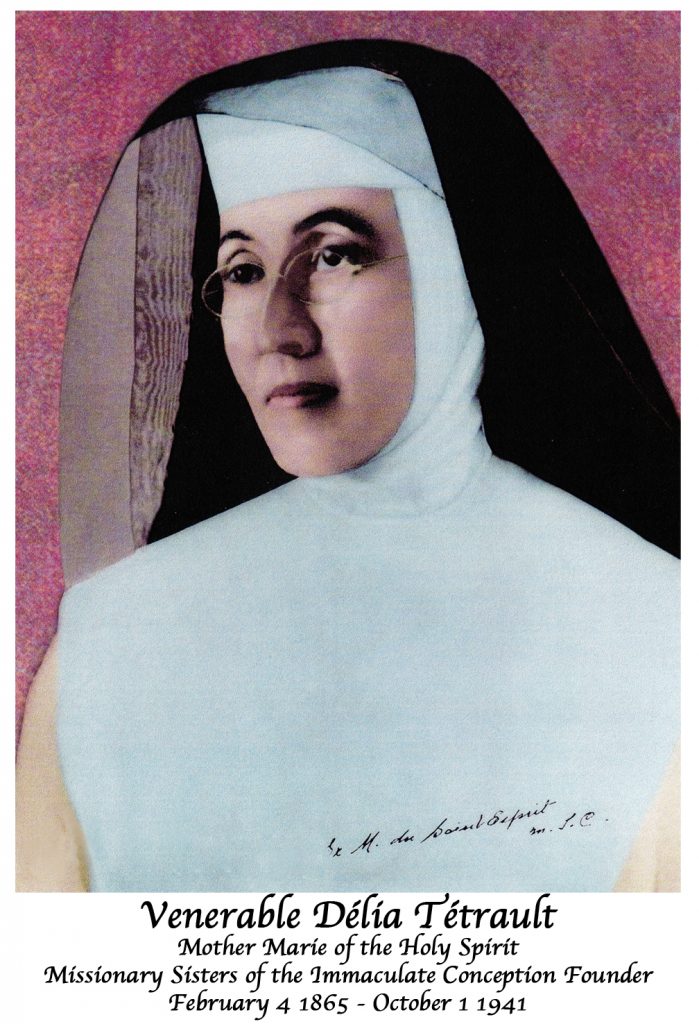 Delia Tetreault was born in Marieville, Quebec on the 4th of February 1865.

Once in her childhood, Delia had a dream. In her dream, she saw a vast wheat field. Each head of wheat opened up and the whole field was transformed into heads of children of different nationalities. This dream made her realize that a lot of children are waiting for someone to talk about Christ.

Only 15 years of age, she made the vow of perpetual chastity. At 18, she made a definitive choice to belong totally to God.

At the age of 35, year 1900 she established her own small community. In 1902, when Pope Pius X learned about this new foundation, he said: “Found, found and all the blessings of Heaven will fall upon this new Institute and you will call them the Missionary Sisters of the Immaculate Conception.”

Mother Delia managed the community until 1933, the year she had a stroke that left her body paralyzed. She passed away like a candle burning out: slowly, very slowly! Her physical sufferings ended October 1, 1941, leaving 554 sisters in 8 different countries.

HISTORY OF THE MISSIONARY SISTERS OF THE IMMACULATE CONCEPTION