Intramurals 2017: A Display of Hardwork, Integrity, and Passion - Immaculate Conception Academy
Spearheaded by the Physical Education (PE) Department, the annual and much-awaited Intramurals 2017 took place last December 15 and 18 at the Délia Tétreault Arts and Sports Center (DTASC) and the Sr. Teresita Canivel, MIC Sports Center (STC). In the High School (HS) Department, the Grade 9 Xenix, Grade 10 Zenon, Grade 11 Aeris, and Grade 12 Helix competed in various sports, and activities during the two days. Grades 7 and 8 also had their own Palaro games in Handball and Basketball, respectively. In the Grade School (GS) Department, Grades 5 and 6 had their own intramurals on December 19, also held at the DTASC.
ica greenhills, ica school, ica grade school, ica high school, catholic school manila
16453
post-template-default,single,single-post,postid-16453,single-format-standard,ajax_fade,page_not_loaded,,qode-title-hidden,qode-theme-ver-12.1,qode-theme-bridge,wpb-js-composer js-comp-ver-6.7.0,vc_responsive 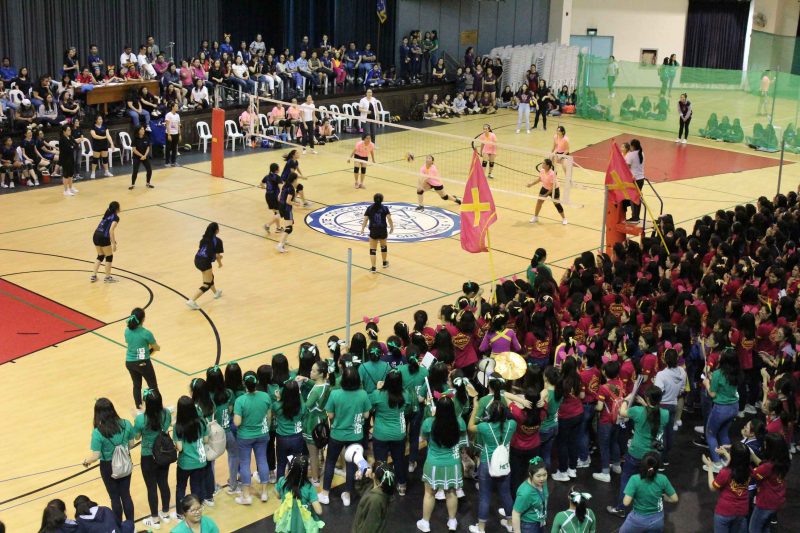 13 Feb Intramurals 2017: A Display of Hardwork, Integrity, and Passion Spearheaded by the Physical Education (PE) Department, the annual and much-awaited Intramurals 2017 took place last December 15 and 18 at the Délia Tétreault Arts and Sports Center (DTASC) and the Sr. Teresita Canivel, MIC Sports Center (STC). In the High School (HS) Department, the Grade 9 Xenix, Grade 10 Zenon, Grade 11 Aeris, and Grade 12 Helix competed in various sports, and activities during the two days. Grades 7 and 8 also had their own Palaro games in Handball and Basketball, respectively. In the Grade School (GS) Department, Grades 5 and 6 had their own intramurals on December 19, also held at the DTASC. Day 1 of the Intramurals consisted of the opening ceremonies, batch barker speeches, cheer dance exhibitions from each batch as well as the ICA Dance Troupe (DT) from grades 7 and 8. The morning festivities ended with an archery exhibition featuring skilled archer Julia Ongchoco (11-Service). After demonstrating her capabilities, some volunteers were also given the opportunity to try their hand at the bow and arrow. This was followed by the respective games for the first day of the intramurals. On the second day, the morning started with a series of relay games opened to all high school students. The relay games were succeeded by the championship games for each sport. To conclude the two-day event, a gymnastics exhibition was presented by members of the SHARP Gymnastics Team, and a varsity basketball exhibition game was conducted by the ICA Basketball Varsity Team. The results of the individual sports and special awards were announced on December 20 following the Kumukutikutitap Concert. The volleyball games are one of the most highly anticipated segment of the Intramurals. This sport entails all members to work skillfully and collaboratively as a team. Taking up majority of the DTASC space, the volleyball court was filled with adrenaline coming from both the competitive players and supportive spectators.  The latter part of the second day of intramurals was allotted for the championship round. The first game was the battle between Xenix and Aeris for third place, wherein Aeris triumphed after 3 sets. The final battle for the championship title took place between Zenon and Helix. The entire High School community, together with visiting alumnae, demonstrated unity and sportsmanship as they cheered for their respective teams. After a review of scores, Zenon was crowned champions of the volleyball segment. Beyond the cheers and screams of the students on the courts, another equally intense game was being held in the DTASC basement. Chess players from each batch battled it out in a game of wits and strategic thinking to come out on top and win it all. After months of preparation and practice, the eight players showcased their analytical skills, quick thinking abilities and tactical genius through their timed moves and carefully-thought out plans. This year’s games did not disappoint with the suspense and intensity played by the rivaling teams. With utmost focus and concentration, the players played with their all, wherein the chess players of Aeris triumphed as champions. This year, badminton players from Xenix, Zenon, Aeris, and Helix trooped the badminton court to play their hearts out for their respective batches. This sport requires creativity and strategy to make the opponent miss the shuttle cock, and it also requires the proper stance and eye-hand coordination in order for the person to successfully hit the shuttle cock. Each year, this sport is played in singles and doubles. Players of each batch can play individually or in teams of two. An elimination process is done in order to see which players triumph. At the end of the elimination rounds, a championship match is played in order to determine the best of the best. For Singles A, B, and Doubles A, players representing Aeris dominated the courts, while Zenon took the title for Doubles B. For the table tennis matches at the Intramurals, each batch had 6 chosen players, with two playing singles and the other four pairing up to play doubles. The format of the games was round robin, with all players facing off against each other. In order to win one round, a player must win three out of five sets, with each set comprising of 11 points. This year’s games were quite unique as majority of players come from SHARP. Teams already had prior knowledge about the playing styles and capabilities of other batches, and competition was heightened due to stronger, more trained opponents. Months of practice came into fruition during the days of the Intramurals themselves as players battled it out, with each batch claiming a medal overall. Taking place at the STC, the Grade 7 students showcased their talents and skills through the sport of handball. All of the seven sections had teams comprised of 12 representatives each, but only seven of these players could stay in the court per game. The sport mixes the fundamentals of basketball, soccer, and netball, with the primary objective of scoring more goals than the opponent team. However, the players are challenged to avoid violations such as double dribbling, or travelling with the ball. The players fought fairly and competently, while the non-players showed no shortage of cheering and support for their classmates. Meanwhile, the Grade 8 classes battled out in games of basketball. After taking up basketball in their PE classes, the students displayed their newfound skills in an interclass competition at the STC. The modified version of basketball had 10 players from every class and games lasting for two 10-minute quarters instead of the four 12-minute quarters. Heartfelt cheers could be heard throughout the STC as the students enlivened the players. Despite being an interclass competition, Palaro has instilled teamwork, sportsmanship, and support among the batch. To culminate all their learnings throughout the school year, the students of Grade 5 and 6 participated in their own intramurals for their respective sports. The Grade 5 students played kickball while the Grade 6 students played volleyball. Selected by the batch PE teachers, the players participated in the one-day interclass tournament by practicing regularly to hone their skills and strategize accordingly. The players from Grade 6-Sincerity emerged as the winners of the volleyball intramural, while players from Grade 5-Benevolence emerged as the kickball intramural champions.